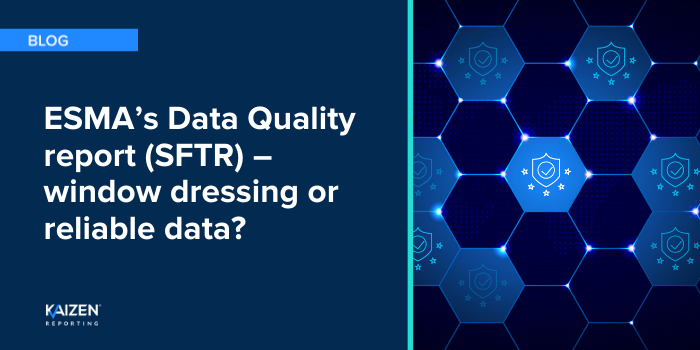 ESMA’s EMIR and SFTR data quality (DQ) report 2021, published on Friday 1 April is the first to truly incorporate SFTR, after the very limited feedback provided in the 2020 report given the newness of the regime. We have covered the EMIR aspect of the report in a separate blog.

It is important to give careful consideration to the DQ report as it reflects some of the National Competent Authorities’ (NCA) and ESMA’s areas of focus. However we would caution firms against using this as the principle measure of data quality. This is because the methods used are flawed and unlikely to reflect the much broader scope of analysis used by NCAs (who are after all, your regulators) in order to detect market abuse, systemic risk and ensure complete, accurate and timely reporting.

We continue to advocate the best, most pressing data quality consideration that ESMA should address is the need for regulatory certainty and tightly defined reporting field definitions where they do not exist today. On a more positive note, we have it explicitly in writing for the first time that,

“Reporting counterparties are expected to have processes, systems and controls in place to ensure completeness, accuracy and timeliness of the reported information.”

“Counterparties are strongly encouraged to use the regulatory data in their own internal risk and compliance management processes.”

On a completely different note, one of the most interesting things to come out of the report centres on one reporting counterparty’s failure to report terminations of open SFTs, resulting in a significant exaggeration of the value of outstanding transactions across the market for most of 2021.  This is something firms should take note of and ensure that they are not putting themselves in the same position.

To reflect on the most poignant observation from this data quality report, a reporting firm’s internal controls should bear in mind that transactions remain live in the database until they reach their contractual maturity date, a modification adds a contractual maturity date or they are early terminated. Reporting open transactions and forgetting is likely to be met with the wrath of the NCA.

*For a consolidated view of the public data, visit ICMA’s website.