The following sub-sections breakdown the key regulations and supporting documents you need to be aware of.

This regulation, No 648/2012, was adopted by the EU on 4 July 2012 and came into force on 16 August 2012, with immediate effect as explained above, along with the main features of this regulation.

EMIR required ESMA to draft Regulatory and Implementing Technical Standards (RTS and ITS) to further detail and and aide in implementing the provisions of EMIR. These standards cover:

The purpose of this document is to promote common supervisory approaches and practices in the application of EMIR. It provides responses to questions posed by the general public, market participants and competent authorities in relation to the practical application of EMIR.

1.1.4. The European Commission’s FAQs on EMIR

This document gives answers to questions on EMIR that have been raised, following the publication of EMIR in the Official Journal of the EU, on the following topics:

EMIR places obligations on any EU entity or EU regulated entity that enters into derivative contracts. This includes both financially regulated entities and unregulated entities. EMIR also has some extra territorial reach as it applies to transactions in OTC derivatives which have a “substantial, foreseeable and significant effect in the Union”.

So what entities have obligations under EMIR?

EMIR introduces entity classifications which we must become familiar with:

A financial counterparty is defined in EMIR Article 2(8) as any of the following:

In order to be classified as a financial counterparty, the entity must be authorised under one of the above directives, as opposed to being authorised under the national law of a member state. Furthermore, it must be established that the entity concerned does not fall within any of the exemptions of the specific directives or those exemptions existing within the text of EMIR (exemptions are set out below):

Authorised AIF managed by an AIFM – ESMA maintains a central public register of all AIFMs authorised under AIFMD.

Authorised institution for occupational retirement provision – in the UK context this will, for practical purposes, mean all tax approved funded pension schemes. Elsewhere, registers may be maintained by national competent authorities, but these may not be publicly available.

Authorised insurance, assurance, reinsurance undertakings and UCITS – For UCITs undertakings ESMA maintains a list. Other registers may be maintained by national competent authorities, but these may not be publicly available.

It should be noted that non-EU firms may be authorised within the EU by one of the directives specified above and as such may be appropriately categorised as an FC. This means the following will have a reporting obligation under EMIR where they enter into a derivative contract (taking on the legal and commercial risks of the contract). Any company, partnership or other undertaking established within the EU.

Sub-funds that sit under an Umbrella fund would be the counterparty to a transaction and therefore must reported as such with an appropriate LEI code.

Thus, an entity which is established within the EU but is not authorised under one of the relevant directives will be an NFC provided that it is an “undertaking” and is “established in the EU”. Unfortunately, there is no guidance within EMIR regarding the meaning of “undertaking” or “established in the EU” and as a consequence an entity could potentially be determined to be an NFC in any of the following conditions.

Individuals would generally be out of scope however, if the trading is in relation to an economic business activity, day trading, operating as a local, hedging as a sole trader then the activity would be captured and have to be reported by the individual. The individual must apply for an LEI for reporting purposes.

Is it a Non-Financial Counterparty+ (NFC+)?

“NFC+” is the term used in the industry (it is not a term used in EMIR) to describe a non-financial counterparty that takes positions in OTC derivative contracts and those positions when added to the unhedged derivative positions of the other Non-Financial Entities in its accounting group exceed the clearing threshold specified in the RTS pursuant to Article 10. The clearing thresholds apply to OTC contracts and are set per class and by gross notional value:

In order to calculate whether it exceeds the clearing thresholds, an NFC shall include all the OTC derivative contracts entered into either by itself or by other “non-financial entities” within the group to which that non-financial counterparty belongs. However, it does not include in its calculation the OTC derivative contracts which are objectively measurable as reducing risks directly related to its commercial activity or treasury financing activity or that of its group (For guidance on the definition of “group”, please refer to ANNEX I – Defining “group” under EMIR).

The term “non-financial entity” is not defined within EMIR, but is clearly intended to be a broader category than NFC, requiring consideration of the derivative positions of group members globally not just those within the EU. Thus, a decision regarding whether an NFC exceeds the clearing threshold, mandates an aggregate calculation across all global entities considered within the scope of non-financial entities.

The key is to identify those NFCs (or those entities that would be NFCs if established in the EU) within the group who carry out proprietary business on an unhedged basis. If those entities have gross unhedged derivatives exposure exceeding a clearing threshold, then we will be able to conclude that all NFCs within the group as a whole should be considered as an NFC+ for the purposes of Article 10(3). As the threshold will already have been breached for Article 10(3) purposes it will not be necessary to then go through any other trades of the wider group.

Unfortunately, there is no simple answer as to what products are within the reporting scope of EMIR – what has to be reported is a function of:

We have therefore broken this question down and addressed it below.

Contracts concluded between counterparties must be reported

ESMA give a definition of conclusion of a contract within their technical standards which states that conclusion of a contract has the meaning of execution of a transaction under MiFID. This however, does not reflect the way in which the reporting obligation has been implemented. In practice, where you or a client is the legal counterparty to a contract then a reporting obligation may arise where the contract is in respect of an instrument in scope.

We have identified a number of scenarios in the section below. Within each we have highlighted where there is a contract between the parties which is subject to the reporting obligation (on the basis the instrument is a reportable instrument).

Often clients will seek to take positions in respect of on exchange derivatives and even bilateral derivative positions. This is normally achieved by entering into a back to back contract with the client which mirrors the on exchange or OTC contract entered into by their broker.

Where the client has the reporting obligation, its reports should identify as its counterparty the party it is legally contracting with. The difficulties are exacerbated as the client would also have to ensure that it was in receipt of the necessary identifiers for the trade including the UTI.

For any trade executed on an electronic platform, both parties should use the UTI generated by the electronic platform if available, otherwise they should default to the next available point of the trade flow for determination, i.e. Middleware or Paper flow.

Where a trade is allocated off-platform (or the platform cannot generate a UTI), then the Dealer allocating the trade will generate the UTIs and notify the buy-side of the references via the communication process.

There is no central generation of UTI at point of execution. The trade is either done by a Broker, or bilaterally agreed between Counterparties. Trade details are sent to Middleware by Parties A and B for matching. 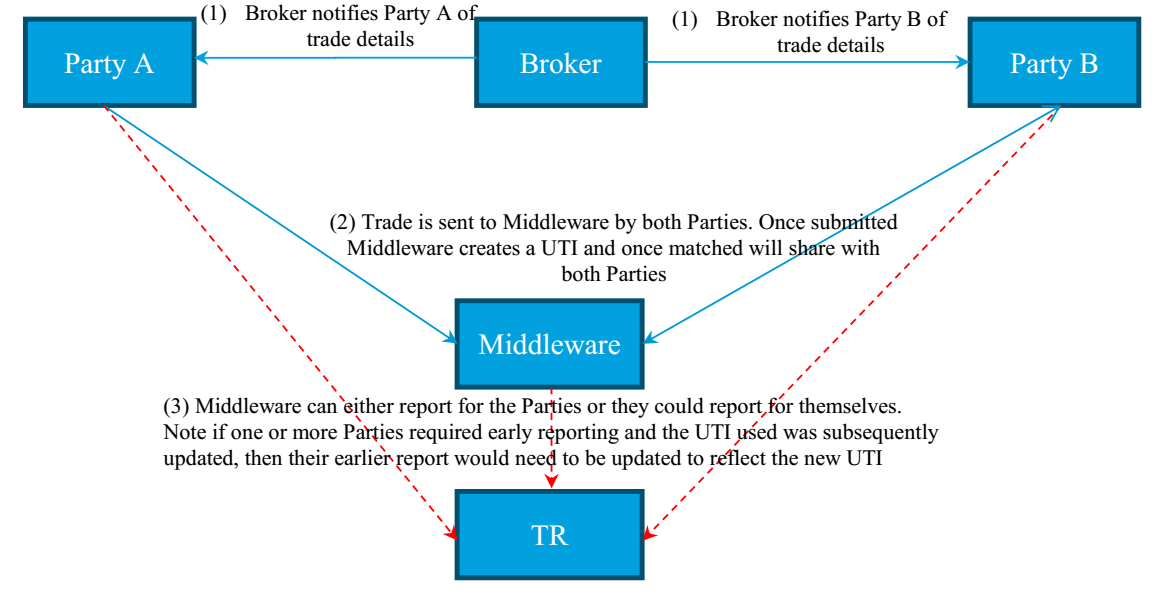 Middleware generates a UTI when the first trade is submitted. If the subsequent submission matches, then the UTI will be shared and consumed by both Parties. Once matched, the Middleware will determine the correct UTI and notify both Parties who will need to consume, and if applicable, update their reference to match.

In the occasional instance where trades get confirmed via Middleware or an electronic confirmation platform which does not offer UTI generation or reporting services, the UTI generation guidelines for paper confirmed trades would apply.

There is no central execution and no Middleware for confirmation matching; trades will be paper confirmed. If the other party receives the agreed UTI before the reporting deadline, then they should also include the UTI on their confirmation. However, if the other Party has not received an agreed UTI before the reporting deadline, they may submit their own trade reference, but not report a UTI until a UTI is agreed, at which time they should update and report with the agreed, final UTI. To determine who generates the UTI when there is no central execution platform.

In the example below, Party B is the UTI generator: 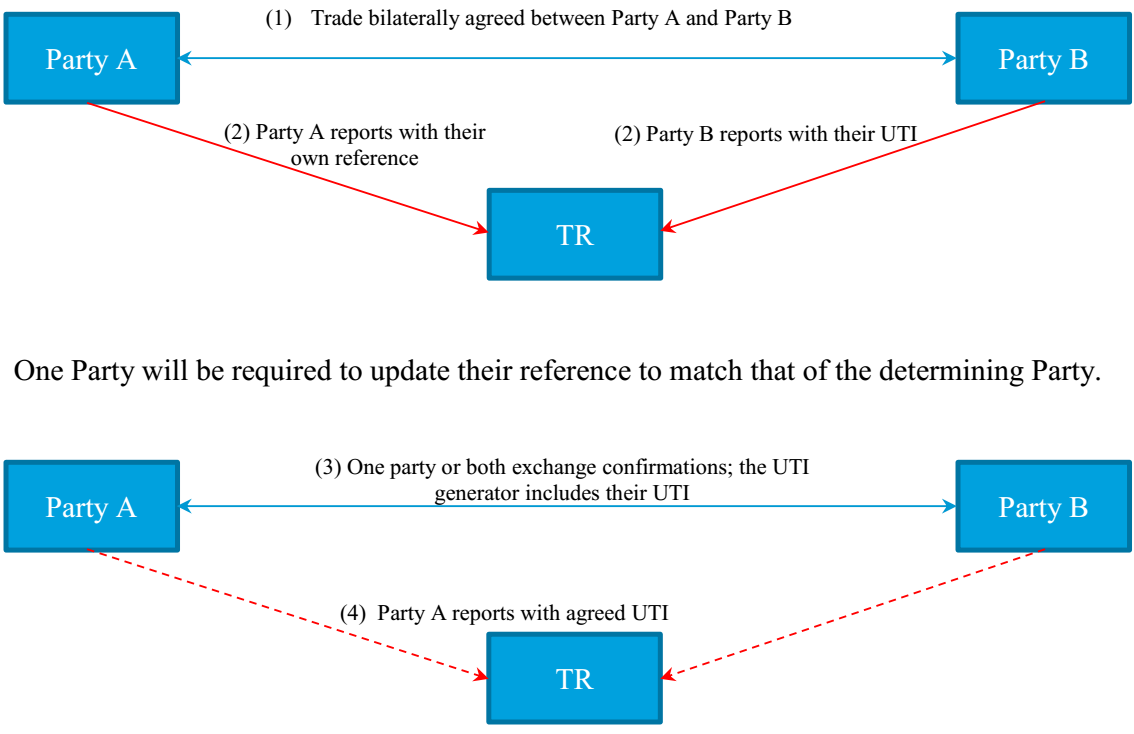 There is no central generation or exchange of UTI at point of execution. One Party/Broker alleges the trade in the Middleware system for the other Party to accept. Middleware system will generate a UTI, which will be shared and consumed by both parties to the trade. 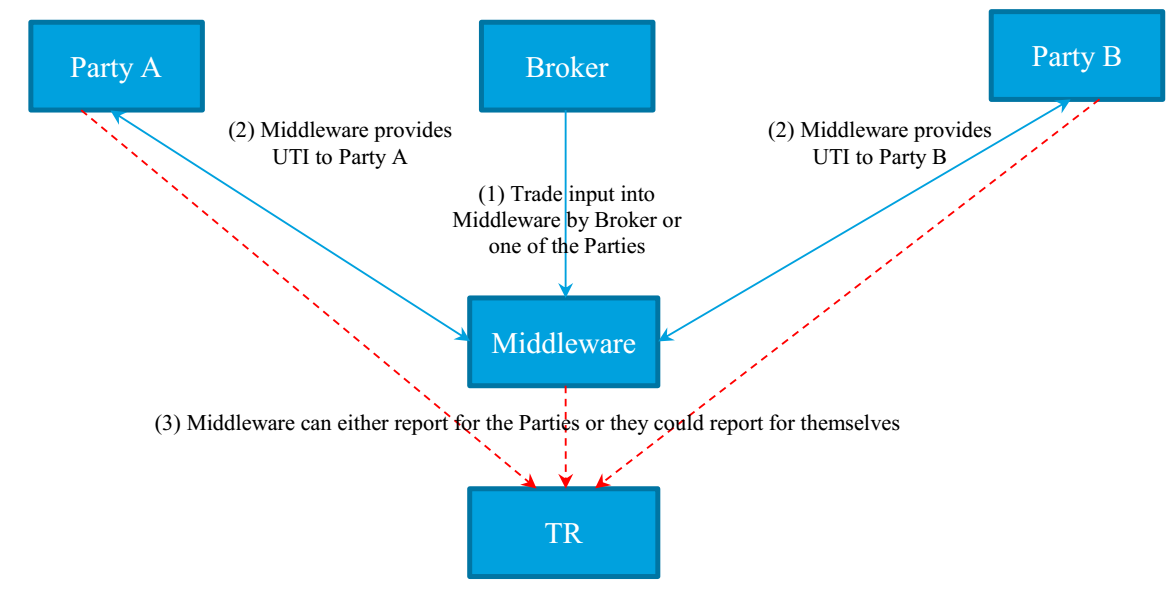 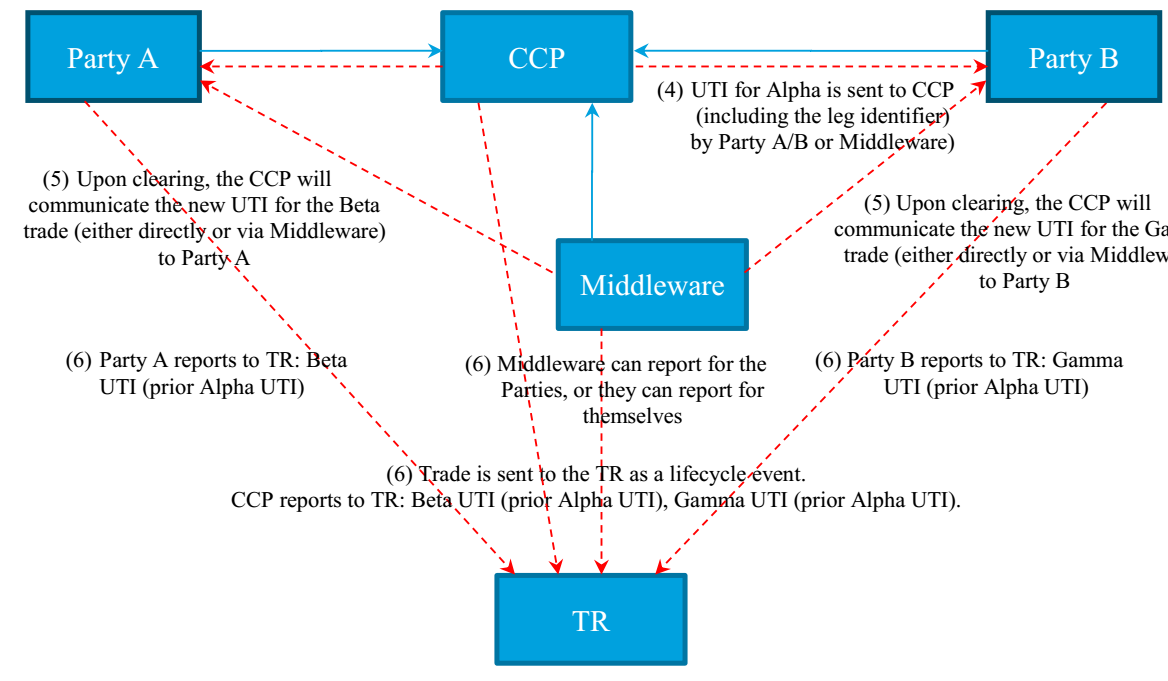 The following diagrams are intended to generically represent common flows for cleared swaps for purposes of communicating the UTI. Not all flows will apply to all asset classes, nor will all CCPs support all flows.

For simplicity of illustration, the cleared trade scenarios show reporting to one TR, however, it is possible that reporting could occur to separate TRs.

The Unlinked model implies no linkage between the two cleared sides. 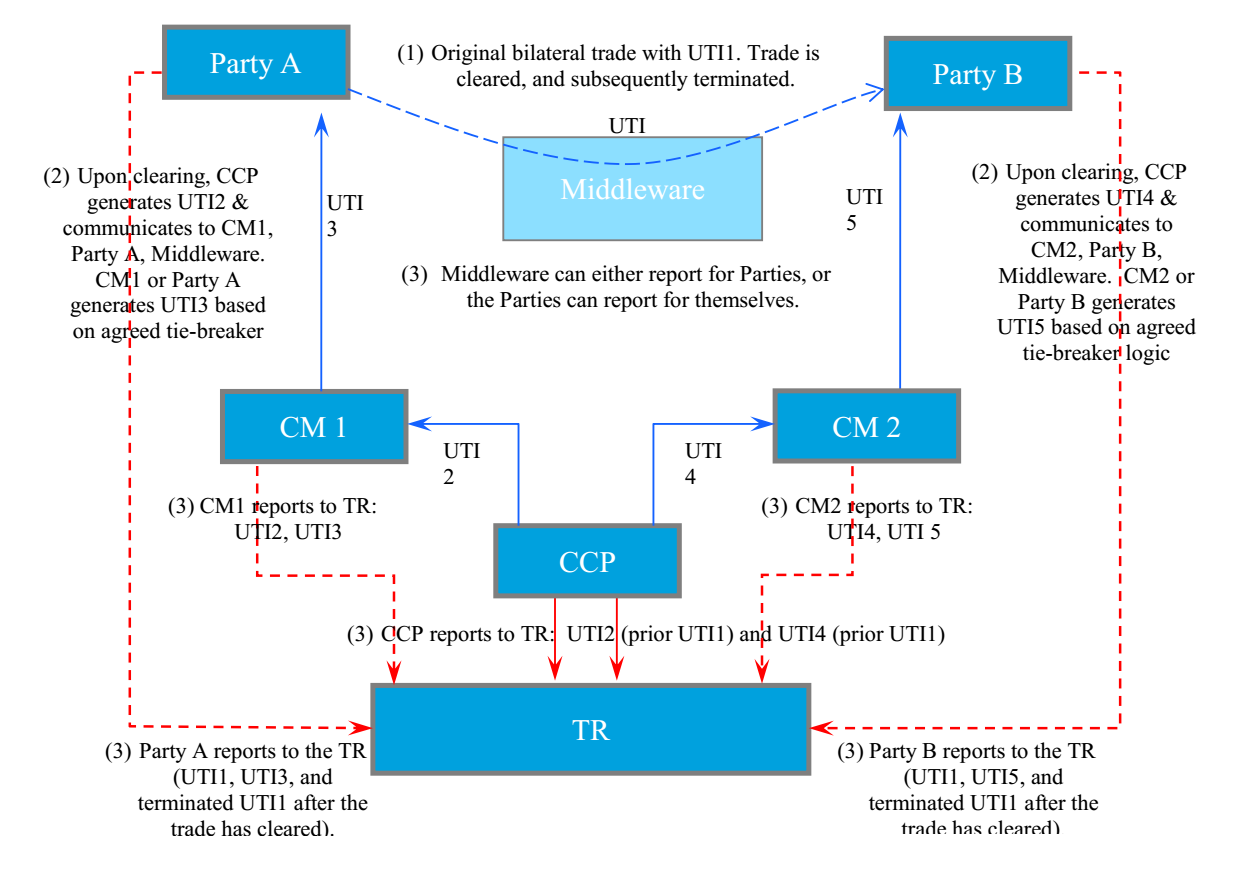 Allocated Trade
The following is a pre-clearing scenario:

Portfolio Transfer
The trade between parties is agreed & already has a UTI (UTI1, UTI2). The portfolio is now being transferred from Clearing Member 1 to Clearing Member 3. 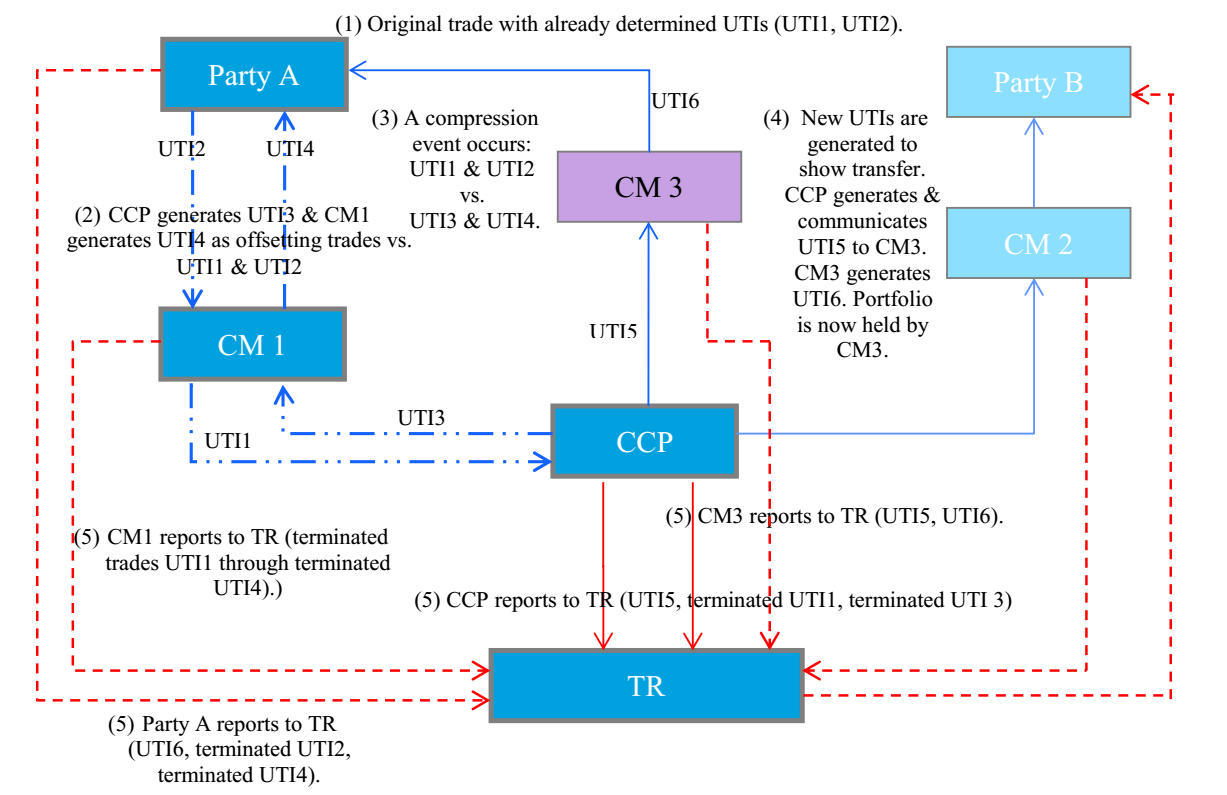 A partial compression, which is a post-clearing event, is shown here. In a full compression, new UT15 and new UT16 would not be generated. 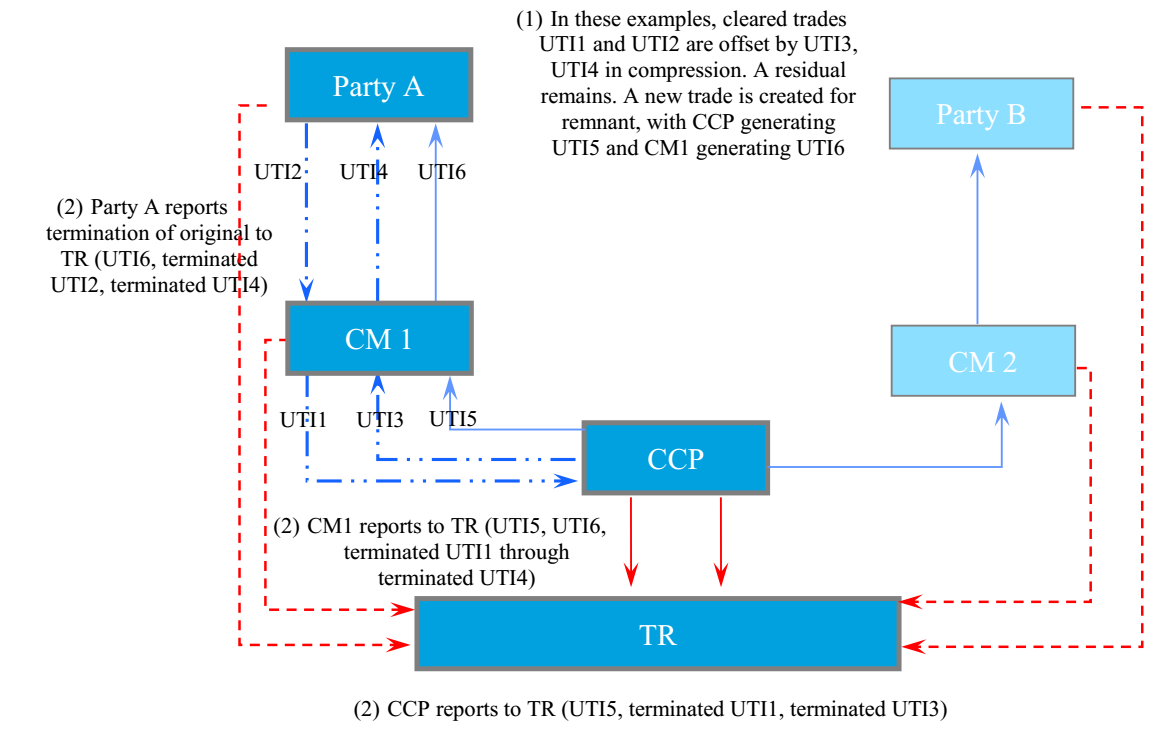 The trade between the original Parties is agreed and already has a UTI. 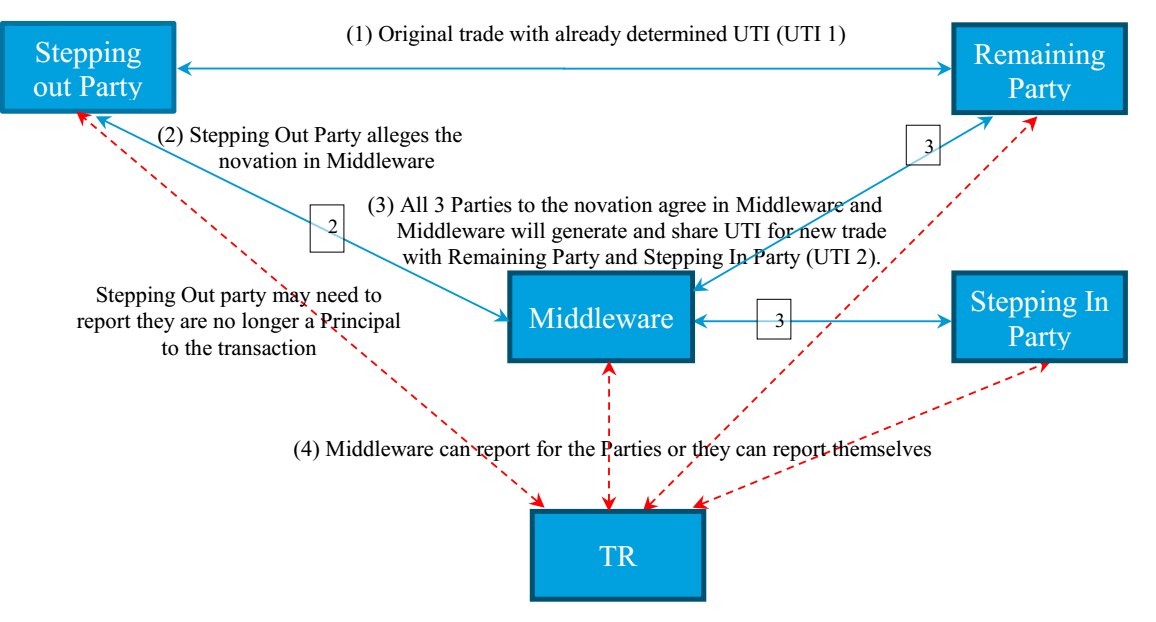 In the case of creation of a new UTI, a reference to a prior UTI will be required.

This is contrary to the view applied in other parts of Europe and under ESMA’s guidance which will treat any FX product where settlement is more than 2 days following entry into the transaction as a financial derivative and therefore reportable under EMIR. So there will be potentially non-reportable FX transactions for UK firms.

Spot contracts
A spot contract for the sale of a commodity, asset or right, under the terms of which delivery is scheduled to be made within the longer of the following periods:

Physically settled gas and power forwards
Physically settled gas and power forwards that are traded on multilateral trading facilities (MTFs) are ‘financial instruments’ for the purposes of MiFID, but are ‘OTC derivatives’ or ‘OTC derivative contracts’ for the purposes of EMIR. This means that the venue field must be XXXX within the EMIR report.

Indices
When reporting indices, the validations applied under EMIR restrict what can be reported. Where the instrument is OTC or is an ETD listed outside of Europe the interim taxonomy must be used. As such commodity index would be reported as follows: