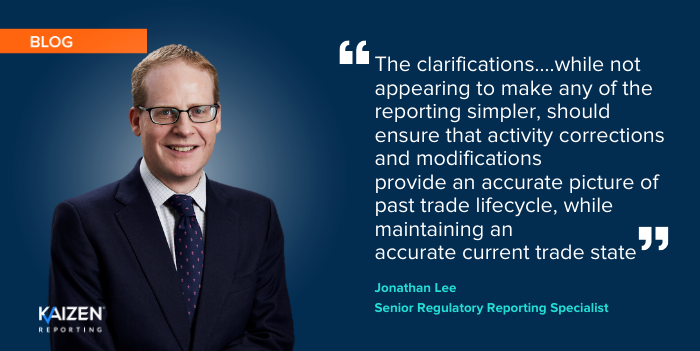 ESMA has updated its SFTR Q&As (28 January) to provide clarification on three areas:

In Question 6, ESMA explains that whether you are reporting one or a number of events (e.g. modifications or corrections) with past event dates (prior to reporting date -1), then you should submit these reports with the correct historic events dates. Since these will not be captured in the current trade state report, you must also send a modification report of the latest version (its current state), with the date in which the report is made (i.e. the same date as in the reporting timestamp field).

ESMA’s response to question 7 clarifies the treatment of events in the creation of trade state reports.

Part a), explains that only actions reported where event date is equal to or one business day less than reporting date should be included in the trade state. This should take into consideration non-working days in the jurisdiction of the reporting counterparty or entity responsible for the report.

Part b), states that the trade state of an SFT relates only to outstanding transactions and that while changes to terminated or matured SFTs should be incorporated in the event log, they cannot be reopened. Trade repositories (TRs) should not update the latest state of an SFT if the event date of a report is prior to Reporting date -1.

Part a) lays out the counterparty & reuse table fields and data that will need to be supplied by the NFC. It also reiterates the FCs responsibility to report the trades as soon as they are in receipt of the necessary information, even when late.

Part b) explains the situation in which the NFC has allowed their LEI to lapse – in which case, the FC must submit reports as soon as it has been renewed by the NFC.

Part c) reiterates that it is the responsibility of the NFC to keep its status as a small NFC up to date with the FC. Where this status is updated late, the FC should submit the missing reports (new trades, modifications & terminations) ASAP.

Finally, Part d) explains that in the unusual situation in which the FC and NFC are reporting to different TRs and the status of the NFC changes such that they become eligible for mandatory delegated reporting by the FC, then the NFC should transfer its outstanding SFTs concluded with the FC to their TR.