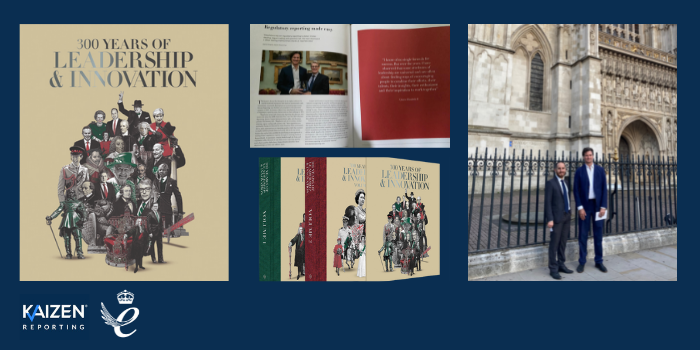 London, 23 September 2021 – Kaizen Reporting is proud to be featured in the History of Parliament Trust’s 300 Years of Leadership and Innovation commemorative publication which was launched at Westminster Abbey on Wednesday, 22 September 2021.

Celebrating the best of British leadership, the publication features articles on those who have shaped British society, past and present; from Walpole to Cromwell, Churchill to Blair, The Queen and Prince Charles, to captains of industry.

Kaizen is featured as part of a section on Queen’s Award for Enterprise winners, as a provider of innovative technology that has transformed the testing of regulatory reporting.

“Regulatory trade and transaction reporting have become ever more vital since the 2008 financial crisis. Regulators rely on it to detect insider dealing, rogue trading and systemic risk.

“Firms were previously testing only samples of data in a superficial way which did not give the full picture of their reporting quality. Using the latest data-processing methodologies we have developed a deep testing method that checks all reported data, adding value both to clients and regulators.”

Dario started Kaizen in 2013 after a career as a regulator and within industry where he experienced firsthand the challenges financial firms and regulators were facing when it came to regulatory reporting.

Today we have a team of over 90 people and more than 130 clients use our assurance services including a number of tier 1 banks and some of the world’s largest asset managers.  More recently we have diversified our service offering with the launch of our Shareholding Disclosure Service and Single Rulebook.

Kaizen won a Queen’s Award for Enterprise in 2017, one of the UK’s highest business accolades.

300 Years of Leadership and Innovation was produced by the History of Parliament Trust in partnership with publisher St James’s House. It is being launched to coincide with the 300th anniversary of the appointment of Britain’s first prime minister, Robert Walpole, in 1721, and in the year of Her Majesty The Queen’s 95th birthday.

You can read the full feature on Kaizen here.