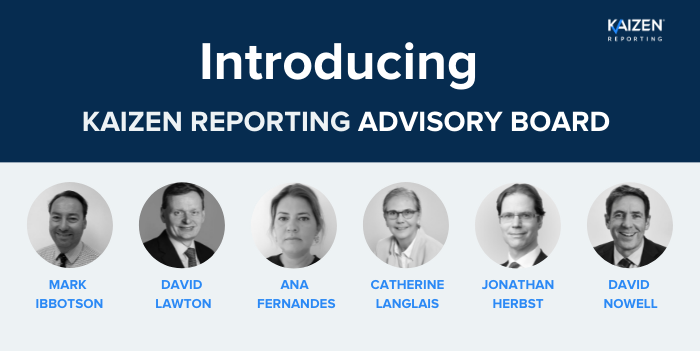 London, 8 June 2021 – Leading regulatory technology firm, Kaizen Reporting (Kaizen), is pleased to announce the formation of its Advisory Board (the Board). The Board has been established to provide expert guidance about challenges and possible solutions for the regulatory reporting community, and how Kaizen can support and assist its clients, non-clients, trade bodies, other stakeholders and regulators in improving the quality of data reported to regulators. The Board will be chaired by Mark Ibbotson and consists of highly respected experts in regulation, technology, law and financial services who include David Lawton, Ana Fernandes, Catherine Langlais, Jonathan Herbst and David Nowell.

Dario Crispini, CEO at Kaizen said: “We are delighted to form a new Advisory Board that includes such an experienced and talented team of industry experts led by Mark Ibbotson. Mark’s wealth of knowledge and expertise and that of the Advisory Board as a whole will be invaluable. The new Advisory Board will be instrumental in looking at the way the industry operates and how it can improve the quality of the data that regulators rely on so heavily to monitor for both market abuse and financial stability. Our overall strategy and ongoing innovation will be pivotal as we build out the business further and ensure that we continue to offer our clients the best possible services and solutions to satisfy their and the regulators’ needs.”

Mark Ibbotson, Chair of the Kaizen Advisory Board said: “Kaizen has established itself as the market leader in regulatory reporting assurance and, with its recent acquisitions, is now building a network of services to help regulated firms navigate and meet their global regulatory needs. I am excited to be engaging with Kaizen at this point in its journey and with such an esteemed team. I look forward to working with David, Ana, Catherine, Jonathan and David as we look to address some of the fundamental issues around reporting quality within the industry.”

We are regulatory specialists on a mission to transform the quality of regulatory reporting in the financial services industry. We’ve combined regulatory expertise with advanced technology to develop our multi-award winning automated services for assurance, shareholding disclosure and our new Single Rulebook digital platform. It’s our forensic focus on data accuracy that sets us apart and we are proud that many of the world’s largest banks, asset managers, hedge funds and brokers are our clients. Whether it’s MiFIR, EMIR, Dodd Frank, SFTR, another G20 regulation or the global shareholding disclosure rules, we exist to help our clients reduce costs, improve quality and increase confidence in their regulatory reporting.